Your are here: Home > Asia > Details 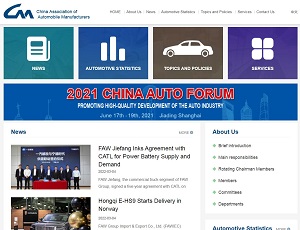 Founded in Beijing in the May of 1987, China Association of Automobile Manufacturers (CAAM) was registered in the Ministry of Civil Affairs on Nov. 28, 1991. CAAM is a self-discipline and non-profit social organization formed based on the principle of equality and voluntariness, which consisting of enterprises and institutions as well as organizations engaged in production and management of automobiles, auto parts and vehicle-related industries founded within the boundaries of the People's  Republic of China.

The Member Representative Assembly is the highest authority, for which the council system is instituted and the secretariat as its standing body. CAAM has more than 2,700 member units now. After over 30 years of development, CAAM has become an indispensable and important force to promote the healthy and sustainable development of the automotive industry. CAAM has been awarded as "National Advanced Social Organization", "5A Social Organization" by competent authorities, and "National Advanced Association of Machinery Industry" and "National Civilized Unit of Machinery Industry" for many years.

lCAAM has played its role in providing services, reflecting demands, standardizing behaviors and building platforms, and has been widely recognized by the domestic and foreign auto industry, government departments and other organizations.

About Caam.org.cn - China Association of Automobile Manufacturers's recommend,only on behalf of the views and opinions about B2B Directory, if you have any suggestions , please feel free to contact with us, we will amend and correct them in the first time according your suggestions. More better B2B Websites recomend, Please click here.
Share |
Related B2B Websites in the world
0 Comments
Hot B2B Site