The Canadian Trade Index (Ctidirectory.com) came into existence in the year 1900, to promote the interest of Canadian industry, commerce and foreign trade.

In 1900, the CTI was the most complete industrial listing of the time, comprised of 800 of the main manufacturing companies in Canada. Today, the Canadian Trade Index is distributed and used extensively throughout Canada and worldwide, and now contains detailed information on over 30,000 Canadian companies, featuring nearly 100,000 product listings under more than 20,000 headings. 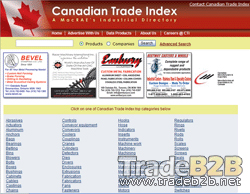 About Ctidirectory.com - Canadian Trade Portal's recommend,only on behalf of the views and opinions about B2B Directory, if you have any suggestions , please feel free to contact with us, we will amend and correct them in the first time according your suggestions. More better B2B Websites recomend, Please click here.
Share |
Related B2B Websites in the world
0 Comments
Hot B2B Site